Slumdog as a Global Film?! 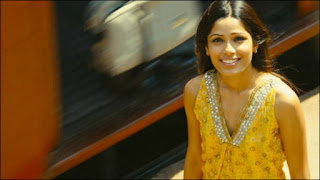 Global media?
If we take global media to be concerned with media forms that are produced in several different production contexts around the world, which then circulate in more than one market and in so doing influence production in the second market. In this way the medium is increasingly globalised as domestic industries mutate through a process of interaction.

In terms of film, up until now the predominant form of change in the international film industry has been of a hegemonic Hollywood across most markets slowly absorbing new talent and ideas thrown up by smaller commercial industries, which have in turn often imitated and stolen Hollywood material. In this paradigm, Hollywood has had little contact with the major film industries of India and has recently found itself to a certain extent rebuffed by renascent industries in Japan, South Korea and the ‘three Chinas’. This challenge to Hollywood has been met by the activities of the major US studios in seeking production deals with South Asian and East Asian producers. In historical terms, this represents something of a return to the 1960s when Hollywood studios attempted to create co-production deals in Europe, especially in Italy and with Japan, but the current engagement with India and China is new. However, the early attempts to engage directly with Indian producers on films such as Chandni Chowk to China (2008) has so far proved strikingly unsuccessful. It is in this context that the distribution and exhibition of Slumdog Millionaire has been so striking.

What makes Slumdog Millionaire so different?
• An Indian property – an Indian novel, Q & A, written in English by Vikas Swarup;
• A UK production company, Film 4, and its partner, Celador, the owner of the rights to the TV format at the centre of the novel, WWTBAM;
• A UK scriptwriter, Simon Beaufoy and UK director Danny Boyle
• Indian musical composer, A R Rahman
• UK dept heads and Indian crew
• One UK actor plus stars of Bollywood and parallel cinema plus non-professional actors
• An Indian shoot and shared post-production India/UK
• A Hollywood studio as North American distributor via its specialist label
• A British/French distributor in the UK
• An Indian subsidiary of a Hollywood studio (Warners) as distributor in India
• Appearances at international film festivals, culminating in awards in the US and UK
• Given a budget of either $10 million or £10 million (sources vary), Slumdog has been a major commercial success. As of 3/3/09 box office grosses were as follows:
US $100 million; UK $37 million; after these, the biggest markets have been France, Australia, Italy, Spain; India (Hindi) $2.6 million; India (English) $3.4 million.
Note that the film has not been a big hit in Hindi markets, but has done very well in English language markets (don’t forget it is still a third Hindi in the English prints). Since tickets for Hindi halls are generally likely to be lower priced than the English language screens, it still means a sizeable audience of around 8-10 million Indians (plus pirated DVD viewings etc.).
Posted by HEWORTH MEDIA STUDIES DEPARTMENT 39117 at 21:19