A Primer to Britain's Top Tabs 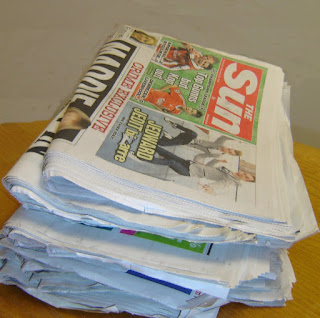 The British tabloids are their own brand of journalism. Whereas American tabloids have occasionally broken news stories but are seen more as celebrity gossip bastions, the British tabloids jump on news stories with the same ferocity as they pounce on celebrity gossip. The result is an eclectic mix of hard news with unique (often anonymous) sourcing and traditional tabloid sleaze. And since tabloids are open to paying good money for story information, they're likely to get scoops that the traditional broadsheets miss -- though raising ethics questions at the same time. It's a cutthroat second dimension of journalism that draws a rabid following both across the pond and around the globe.

• The Sun: Owned by Rupert Murdoch's News Corp., The Sun is splashy, trashy, and often scooping the competition. Published in the U.K. and Ireland, The Sun has the highest circulation of any English-language daily paper in the world. Regular features include the Page Three Girl, which some have decried as pornographic. Politically, the paper espouses strong views on law and order and immigration; it endorsed Mrs Thatcher, continiuing its support for the Condervatives through the 1990s. For example on the day of the general election of 9 April 1992, its front-page headline, encapsulating its antipathy towards the Labour leader Neil Kinnock, read "If Kinnock wins today, will the last person to leave Britain please turn out the lights". Two days later The Sun was so convinced its front page had swung a close election for the Conservatives it declared "It's The Sun Wot Won It".. However, after Thatcher was replaced, aware of the lack of support for the Conservatives and doubtless not wanting to be seen to be backing a loser, the paper switched its allegiance to Tony Blair's New Labour, though it continued to support the Conservative view on issues like immigration, Europe and it opposed Labour's support for a minimum wage. Switched allegiance back to the Conseratives in 2009. It has been critical of Gordon Brown’s policies and the Tories were clearly rising in the opinion polls. "The Sun believes - and prays - that the Conservative leadership can put the great back into Great Britain". Murdoch’s News Corp is notorious for backing conservative causes.

Facts about The Sun and its audience can be found here: http://www.nicommercial.com/thesun-newsoftheworldmedia/audience-insight

• News of the World: Also owned by News Corp., this is essentially the Sunday version of The Sun. It originally cost three pence in 1843. The right-leaning newspaper enjoys sales of about 3.4 million each Sunday.

• The Daily Mirror: This consistently left-of-centre tabloid was launched in 1903 as a newspaper run by and geared toward women, but new leadership the next year and a new direction resulted in all of the female journalists being fired. In the 1970s, the Sun surpassed the Mirror in circulation and the Mirror has since been plagued by declining circulation. A famous front page after the 2004 U.S. presidential elections bore a picture of George W. Bush and the headline "How can 59,054,087 people be so DUMB?"

• The People: This Sunday-only paper is owned by the company that runs the Daily Mirror, and considers itself a competitor to News of the World.

• The Daily Mail: Britain's oldest tabloid has a storied history, including having supported Adolf Hitler. Nowadays, the politically conservative paper has the 12th-largest circulation in the world among English-language dailies. It is published by Associated Newspapers, the same company that publishes the free morning tabloid, Metro, available on public transport systems in 14 UK cities. News International, a UK subsidiary of Murdoch's News Corporation, launched a London-based newspaper in 2006 called thelondonpaper but his was closed on 18th September 2009 because it couldn’t make headway against the exising products. The majority of The Mail's readers come from the A/B high income group and are over 55.

• The Daily Express: Founded in 1900 and introducing both newspaper gossip and the crossword puzzle to British readers, this paper became a tabloid format in 1977 and politically leans conservative. A major rival is the Daily Mail. Its front page banner describes the Express as "The World's Greatest Newspaper."

• The Daily Star: Launched in 1978, this became Britain's first new newspaper since the Daily Mirror debuted in 1903. It's published by the same company that produces the Daily Express, and politically leans to the right. The paper also has a daily scantily clad woman, mimicking The Sun's Page Three Girl.

In the UK, three previously broadsheet daily newspapers—The Independent, The Times, and The Scotsman—have switched to tabloid size in recent years, although they call it "compact" to avoid the down-market connotation of that word. Similarly, when referring to the down-market tabloid newspapers the alternative term "red-top" (referring to their traditionally red-coloured mastheads) is increasingly used, to distinguish them from the up-market compact newspapers. The Guardian, ever wanting to be a bit special, shrank down from broadsheet to Berliner - i.e. a slightly smaller version of the broadsheet.