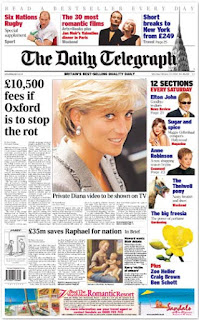 Broadsheets
Broadsheet refers to the most common newspaper format, which is typically 11 to 12 inches wide and 20 or more inches long. Many of the nation's most respected newspapers - The Times, The Guardian, The Independent and so on were all broadsheets until very recently and still maintain the same serious in-depth journalistic approach to the news. Others, like The Financial Times and The Daily Telegraph, remain broadsheet papers. Broadsheet papers are usually six columns across.

Beyond their size, broadsheet papers tend to employ a traditional approach to news that emphasizes in-depth coverage and a sober tone in articles and editorials. Broadsheet readers often tend to be fairly affluent and educated, with many of them living in the suburbs. 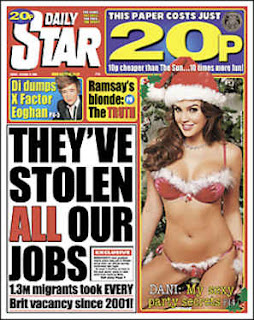 Tabloids
In the technical sense, tabloid refers to a type of newspaper that typically measures 11 X 17 inches and is five columns across, narrower than a broadsheet newspaper. Since tabloids are smaller, their stories tend to be shorter than those found in broadsheets.

And while broadsheet readers tend to be upscale suburbanites, tabloid readers are often working class residents of big cities. Indeed, many city dwellers prefer tabloids because they are easy to carry and read on the subway or bus.

Tabloids also tend to be more irreverent and slangy in their writing style than their more serious broadsheet brothers. In a crime story, a broadsheet refers to a police officer, while the tabloid calls him a cop. And while a broadsheet might spend dozens of column inches on "serious" news - say, a major bill being debated in parliament - a tabloid is more likely to zero in on a heinous sensational crime story or celebrity gossip.

In fact, the word tabloid has come to be associated with sensationalism and, with the notable exception of The Daily Mirror, conservative views, especially on law and order, ties with Europe, immigration and anything they consider challenges what they constitute as 'normal'.

But there's an important distinction to be made here. True, there are the over-the-top tabloids like The Daily Star, but there are also the so-called respectable tabloids - such as the Daily Mail, The Daily Mirror and The Daily Express. While it would be difficult to compare the efforts of the Daily Mail to that, both it and the Express undoubtedly see themselves as a cut above the Mirror and several cuts above The Sun! Both papers tend to cater for a more middle class audience than the Red Tops.
Posted by HEWORTH MEDIA STUDIES DEPARTMENT 39117 at 23:07