Convergence and the Film Industry II 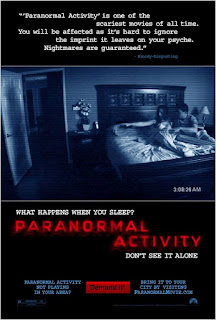 Have you seen Paranormal Activity? The promotional campaign behind it is as interesting as the movie itself and is another example of a major Hollywood studio (Paramount) using new technology to sell a movie:

The biggest movie marketing success story of the year is likely to be Paranormal Activity, the cheap little indie horror film that Paramount has slowly but surely turned into an event and now a moneymaker. Oren Peli directed Paranormal Activity two years ago (1997); the film had been screening in the Los Angeles horror community (i.e. someone had a screener and was passing it around to all the critics and filmmakers in LA) and the buzz was strong. The film, everybody was saying, was scary and good. Made for very little money, it looked like an indie horror film that could get some attention and make some cash.

Then it got bought by Paramount Vantage (a subsidiary of Paramount), but the plan was to remake it with stars and a budget and FX. People were hoping that the original film would still see the light of day in some shape or form, if only as a DVD release, but it was obvious that a larger budget remake, which would eschew Peli's cinema verité approach, would ruin the premise.

Paramount made cutbacks and closed down Vantage. Plans for the remake were scrapped; however, the buzz about the original was still strong amongst horror fans and news was leaked about the high-profile interest of Steven Speilberg who allegedly suggested the ending that the released version has.

In the summer of 2009, Paramount ‘leaked’ rumours that it was going to release Paranormal Activity, but no-one seemed to have a real release date and it wasn't even clear where the movie would open. However, this seems to have been part of Paramount’s plan to set up a really innovative, exciting marketing campaign that would make use of social networking like no other campaign before it.

The studio rolled the film out at a number of midnight screenings across the country on September 25th. One of the places where the film premiered was Fantastic Fest in Austin, Texas, where hundreds of die-hard genre fans lined up for a chance at being the first to be scared by the movie. Paramount had made a possibly risky move, using a quote from Dread Central (the premier website for breaking news, original content and active community in the world of horror, covering movies, DVDs, games) on their advertising calling Paranormal Activity one of the scariest movies ever made and a strong positive buzz came from these screenings. 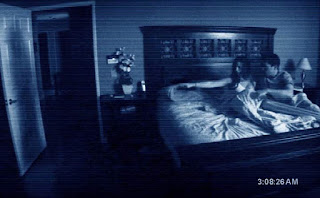 Paramount started a ‘viral’ campaign by using on Twitter (including a "Tweet Your Scream" promotion), Facebook and other social networking sites to convince people to 'demand' that the movie come to their home town. The movie’s own website encouraged fans to "Tweet Your Screams." More than 6,500 followers on Twitter read breathless 140-character reviews such as: "Just got back from seein Paranormal Activity & I'm still LITERALLY shaking. Sleepin w/ the lights on tonight." And, of course, they would spread the word, both verbally and on internet sites like aintitcool.com.

Paramount vice chairman Rob Moore told The Economic Times: “We all spend a lot of time talking about Facebook and Twitter and our ability to communicate. Here’s a case where it allows people to rally around a movie they care about and for them to have a sense of participation, then tell other people, ‘Hey, this is something you should see, too.’”

Of course, Twitter and Facebook appeal particularly to the younger generation, the 15-25 year-olds who form the core of the audience for horror movies.

The studio also worked with Eventful Inc., a San Diego company known for promoting concerts. Using an Eventful feature called "Demand It," Paramount asked fans to determine where the film would show next by clicking the ‘demand’ button on the website.

"When they saw the success of that early campaign, the question at the studio level was does this thing deserve a nationwide release, and they were not sure," said Eventful President and Chief Executive Jordan Glazier. "So they put a big number out there and said, 'Hey, let the fans decide.' "

That number was 1 million "demands," which Paramount said it would take to release the film nationally. Glazier thought reaching that number would take weeks. It took four days.

The 'demand' push itself was a touch phony, though, but in a great way. Buoyed by the buzz from the midnight screenings, Paramount already planned on opening the movie wider on October 16th, but the one million 'demand' strategy was a way of making it look like the people themselves wanted this to happen (this sort of fake grassroots movement is common in politics, where it's called astroturfing and in business, it’s the idea of giving people ‘ownership’ of the product, so they will feel part of it and be more likely to buy it).

The 'demand' strategy is wonderful because it creates the feeling of a solid fan-based buzz, which is important in the modern Twitter land/blog world where young audiences trust their peers for movie recommendations far more than older people writing in newspapers. The strategy allowed actual fans of the movie to get involved and feel like they were doing something to share an experience they enjoyed with more people. And on top of that, it puts Paranormal Activity squarely in the underdog position, which is always attractive to people.

What Paramount may not have expected is the level of success the film would find in its initial limited release. The movie made around 5 million dollars that weekend, pushing it into the top 5 while playing on only 159 screens. The weekend's top movie, Couples Retreat, grossed $34.2 million, but that was in 3,000 cinemas. Paramount planned to go even wider on October 23rd, going into another 1000 cinemas against Saw VI. Bear in mind, the movie cost only $15,000 to make. The average cost of a Hollywood movie is over $30 million...

Paramount has truly figured out the way to harness social media and make it a strong marketing tool, by whipping up the illusion of a strong public demand so much that it seems to have turned into a legitimate public demand. That's the best kind of gimmick - one that ends up not being a gimmick after all. The problem, of course, is that an event isn't enough on its own - you have to have a movie that actually works, that actually makes people want to Twitter that they've just been scared. 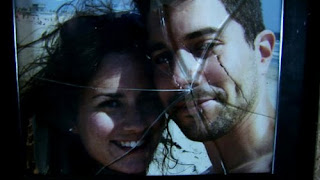 The Marketing of Paranormal Activity – Questions

1. When was Paranormal Activity made?
2. Why did Paramount Vantage buy the film and NOT release it?
3. Interest in the film was kept alive amongst horror movie fans and received a
boost when which famous director said he was a fan?
4. How did Paramount first start to promote the film and what information did
the company NOT give out in order to tease the potential audience?
5. To build an audience for the film, how did Paramount first release it?
6. How did it enlist Dread Central website to help promote the film – and why?
7. These tactics resulted in a lot of positive comments about the film, but how
did Paramount capitalise on this?
8. What did Facebook and Twitter allow people to do?
9. How did Paramount work with Eventful Inc?
10. Paramount Executives knew a wider release would work, but how did using
the ‘Demand’ button strategy boost the chances of snaring a large audience?
11. Why do you think using Twitter, Facebook and web-based promotion is
important to the main audience for horror films, bearing in mind it falls
into the 15-25 age-group?
12. How successful was it on its first weekend of limited release? Give some
figures!
13. What do you think platforming is?
14. What do you think is meant by ‘viral marketing’?
Posted by HEWORTH MEDIA STUDIES DEPARTMENT 39117 at 20:53