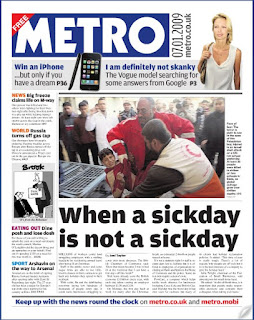 What of The Metro, the free tabloid you can pick up on your bus or metro jorney in the mornings?

Metro is the trading name of a free daily newspaper, launched in London in 1999, and now be found in 14 UK urban centres. Localised editions are distributed in Birmingham, Brighton, Cardiff, Edinburgh, Glasgow, Leeds, Manchester, Liverpool, Tyne and Wear, Sussex, Sheffield, Nottingham, Bristol and Bath. It is part of the same media group as the Daily Mail and The Mail on Sunday (Associated Newspapers Limited), although in some areas, the paper operates as a franchise with a local newspaper publisher, rather than as a wholly owned concern.

Rupert Murdoch is said to have regretted missing the opportunity of launching his own London paper. However, News International, a UK subsidiary of Murdoch's News Corporation, launched a London-based newspaper in 2006 called thelondonpaper. This was closed on 18th September 2009.

The newspaper was designed to be read in 20 minutes. The features section contains a mix of articles on travel, homes, style, health and so on, as well as extensive arts coverage and entertainment listings, cartoons, puzzles etc.

On 8 July 2009, the online version of Metro was merged with London Lite.

It has over 1.35 million readers a day due in part to the papers being left on seats on buses, train or the Underground systems in Glasgow, Tyne and Wear, and London, and then being picked up by the next person to use that seat.

Due to its urban and mainly youthful audience, advertising receipts have been very healthy at a time when its older stablemate, the Evening Standard, had not been performing so well. 2% of readers are ABC1 (upper/middle class social grade), 78% are aged 15–44 and 64% are in work - which, of course, would make sense, because it will be picked up by people on their way to work in the mornings... It looks like a middle-market tabloid, like the Express, Mirror or Mail, but, perhaps, not with the same level of actual news content and some features specific to the area its distributed in. Some of its stories tend to be Mail-like i.e. highlighting crimes with immigrants involved and it seems to prmote a conservative ideology. 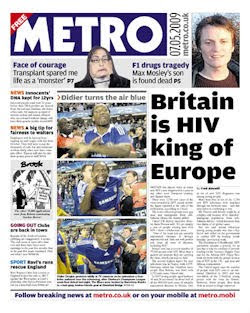 The questions are: do people read this who wouldn't normally buy a newspaper? Would you read it instead of buying a newspaper or as well as buying one? How much of a negative effect is having on the fortunes of other daily newspapers?
Posted by HEWORTH MEDIA STUDIES DEPARTMENT 39117 at 21:03