Hillsborough and The Sun and Audience Theory

The Manipulative Model, like the Hypodermic Syringe Model, would see the institution (here, Rupert Murdoch's News International) being able to change the way of thinking by an audience which is passive. That is, the audience will believe the angle The Sun takes, that the representations it produces are truthful and accurate and will accept them as real and will be influenced by their ideology.

An opposing view - the Pluralist or Market model - would point out that the Manipulative Model has not taken into account the choices the audience have made in their media consumption. There are other newspapers with variations on The Sun's views or even completely different views. No-one forces the audience to read The Sun. IT might be argued that The Sun had adapted itself to reflect the views of a large proportion of the population (hence its backing for Margaret Thatcher, then switching to Tony Blair's New Labour, then switiching again to David Cameron's Tory party. Remember, it has to sell to attract advertisers who, in turn, bring money into the company. Pluralists believe that different groups and interests in society are competing for audiences and the most successful are those that manage to appeal to the widest audiences. The model suggests audiences are active in the way in which they choose their media.

The third model - the hegemonic model - acknowledges that much of the media (whether Labour or Tory-supporting) is under the control by a relatively small group of interests (white, middle-class and male) and that the viewpoints associated with these groups become embedded in their products, though the promotion of these views is not necessarily conscious; indeed, these views are seen as 'common-sense' or 'normal'. Some parts of the audience will try to resist, making different choices and challenge the idea of the consensus. 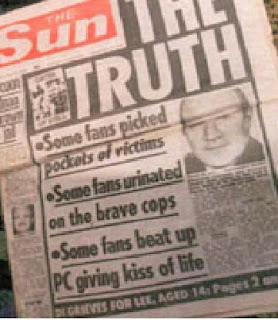 After the Hillsborough disaster on 15 April 1989 when a crowd surge led to the death of ninety-six football fans in a game between Liverpool and Nottingham Forest, The Sun accused Liverpool fans of picking the pockets of the dead, urinating on dead bodies and attacking policemen who were trying to rescue people. The stories were unfounded and led to a campaign to boycott the Sun among Livepool fans on Merseyside, causing the circulation to drop by 200,000. The paper apologised but there are still shopkeepers in the Liverpool who refuse to stock it.