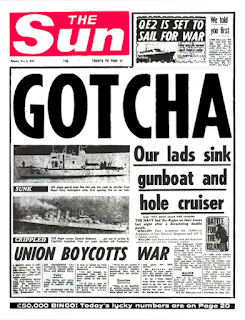 Definition: In the context of the 2010 Controlled Test, the Popular Press refers to mass circulation national newspapers, targeted at the popular end of the market.
This would include such titles as The Sun, The Daily Mirror, The Daily Express, The
Daily Mail, The Daily Star, The News of the World, The People, The Daily Record, the Sunday Mail and their associated websites.

For the purposes of the 2010 controlled test the non-contemporary context is focused on recent history, particularly the last ten years and the rise of on-line newspapers. Get that?

The following was 'borrowed' from a number of sources:

• Tabloid – a size of newspaper (43 x 28 cm aprox) usually more
sensationalist and less serious in their news coverage
• Broadsheet – larger format (74cm x 59cm approx) more serious and detailed
coverage of news
• Caption – descriptive words next to a picture
• Masthead – title block of a newspaper
• Slogan – reinforces the identity of the paper
• Leader – the lead story for a page
• Kicker – an article designed to jump out from the rest of the page
• Copy – printed articles in a newspaper
• Paparazzi – photographers who specialise in taking celebrity photos
• News Values – the criteria editors use to select news stories.
• Stereotypes – A pre conceived idea of a social group , often reinforced by
the popular press, e.g youth as yobs
• Convergence – as a result in the increase Media technology there is a
melding together of communication forms. Such as newspapers and the internet.
• Branding – the distinctive features by which we recognise products
• Puffs – star or circle shapes with word like ‘exclusive’ or ‘special.’
• Column – the copy is arranged in columns.
• The splash – the main front page story.
• Headlines – attract attention to the main story.
• Subheadings – give additional information for the headline.
• Double-decker headline – a headline over two lines.
• Multi-deck headline – a headline over three or more lines.
• By-line – who wrote the article
• Strapline – the ‘slogan’ under the mast head, e.g. ‘first for news.’
• Tabloid tag - a phrase prefacing the name of the person written about to add some
explanatory detail to the person written about e.g 'Love Rat John Terry...'
• Topic paragraph - the opening paragraph that effectively sums up the main point of
the story
• Cover price – the price of the newspaper.
• Ears – the top left and top right hand corners – often they have special attention-
grabbing features.
• Puffs – star or circle shapes with word like ‘exclusive’ or ‘special.’
• Caption – the words by the picture which explain what it is.
• Circulation – The number of copies a newspaper sell
• Readership – The number of people that read each copy of the paper 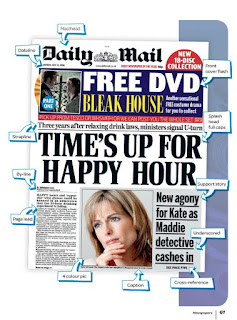 Key Conventions of the Popular Press

• Headlines. The most prominent feature of any article is the headline. Front page
headlines are particularly important as they aim to grab the reader’s attention and
help sell the newspaper. Headlines are usually short and catchy. The Popular
Press place particular value on headlines which can dominate the front page.
• The Pictures. As with the headline, a good picture is vital to grabbing the
attention of the audience. Newspaper photographs can be very powerful, and
sometimes tell the story in their own right. Some photographs are very famous
and have become the defining images of certain historical events.
• Captions. Photographs are accompanied by captions. Captions anchor an image
and help the reader interpret the photograph. The language of a caption rarely
just describes the image, instead it adds to the angle of the accompanying article.
• The Copy. Copy is written by reporters. It is written in a certain style and format
which aims to quickly establish the facts of the story, and to hook the reader into
reading the whole story.
• Masthead. The masthead is the title that identifies the newspaper. The use of
colour, language, symbol and design all help create the identity of the newspaper. Many Popular Press titles are known as Redtops due to their use of red in the masthead.

• The key conventions of the Popular Press are common to all newspapers; however, the way they are employed is quite distinct from the Quality Press. Typically, front pages are designed to grab attention, and use short, bold headlines and a large dramatic photograph. Even within the Popular Press itself, there is variety and difference between titles. Students should be encouraged to examine the brand identities of different newspaper titles as expressed through their design, content and language.

• Using large pictures and shorter copy than the Quality Press, the Popular Press often relies on pictures to tell the story. Newspapers use a mix of snatched and posed photography and images can be cropped or enlarged. The way a picture is positioned and the accompanying caption are all part of a number of factors that can affect our interpretation of an image.
Posted by HEWORTH MEDIA STUDIES DEPARTMENT 39117 at 22:39