Amber is a film & photography collective, founded in the Newcastle upon Tyne in 1969, incorporating Amber Films, Side Gallery, Side Cinema and Side Café (http://www.amber-online.com/), with a self-determined remit to record working-class life in its region. The work is rooted in social documentary, built around long-term engagements with working class and marginalized communities in the North of England. There is an integrated approach to production (which includes documentaries, dramas and photographic projects), publication (including exhibitions, books, DVDs and works created specially for the web) and distribution.

The approach is celebratory, even when the marginalization of lives and landscapes makes this more difficult. Production grows out of the relationships with these communities, and creativity is inseparable from that of the people with whom Amber works. Rooted in practical craft skills (camera work, direction, editing, sound, etc), there is an egalitarian, collective approach to the filmmaking. Technological innovation has made the different processes ever more democratically accessible, and Amber has taken advantage of this to extend its on-going experiment in collective creativity.

Amber's contribution to British film culture should, therefore, be located both within an important strand of independent film-making, and a tradition of social realism that dates from the documentary movement of the 1930s but that also has clear antecedents in post-war European neo-realism.

Amber's first film, Maybe (1969), had its origins as a student film by Murray Martin and Graham Denman. Having obtained financial support from Northern Arts (Amber's only continuous sponsor), they then produced Launch in 1973, documenting the construction and launch of a tanker at the Wallsend shipyards. Produced with a budget of only £400, Launch exemplifies Amber's approach to aesthetics, politics and working practices.

Amber is committed to accessibility This is one example, along with its geographical remoteness from London and its sometimes curious funding arrangements (including owning both a racehorse and a pub), of the genuine eccentricity that has played a part in Amber's survival.

With funding from Channel 4 under the terms of the ACTT Workshop Declaration, Amber produced its first feature film, Seacoal, in 1985. The result of two years living and working with the seacoalers, the film incorporates elements of straight documentary, improvised sketches and fully dramatised reconstructions. Contrary to the charge of romanticism that is sometimes levelled against Amber, their films such strive for an honest depiction of the frequently harsh realities of working-class life on the margins, one which certainly pays tribute to its dignity but which is far from romantic. Furthermore, the films stand as important social documents, as these different ways of life are steadily eradicated.

It is disappointing that films such as Amber's Like Father (2001), unlike mainstream productions set in a similar environment, such as Billy Elliott (d. Stephen Daldry, 2000), can only obtain a very limited theatrical release. Like Father is arguably Amber's most accomplished film to date, exemplifying their characteristic working practices (two years building the film in the community with a largely amateur cast, including the three main leads), their aesthetics and understated politics in a narrative that interweaves the personal and the political with genuine social authenticity and considerable emotion. 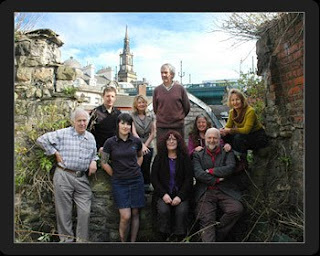 Over the past thirty three years, Amber have not merely survived but thrived, in spite of the erratic financial context for independent, regional and workshop production. It is unfortunate that a distribution and exhibition system increasingly aligned with mainstream commercial product has restricted opportunities for audiences to view their original, accessible and relevant films.

SHOOTING MAGPIES (2005) 80 mins; digital video
Fine performances and an unflinching gaze... New York Times
Special Mention, Britspotting Festival, Berlin 2006
Emma, a mother at fifteen, now in her early twenties, wants some kind of normality for herself and her two daughters in an area where drug use is common. When, one last time, Emma tries to get her partner Darren off heroin, ex-youth worker Barry is drawn into a chain of events that begins to threaten the relationship he has built with his son.

Set in post-industrial East Durham, in the North East of England, Shooting Magpies is a film about hope and survival. Shot on digital video, Shooting Magpies is the third feature film in Amber’s coalfield trilogy. The Scar (1997) looked at the lives of women after the Miners’ Strike and the campaign against closures. Like Father (2001) explored men’s lives.

Made with the financial support of Northern Rock Foundation, Northern Film & Media and Channel 4.

THE MAKING OF SHOOTING MAGPIES - the film grew out of relationships, workshops and Coalfield Stories, a photographic programme to document changing lives and landscape that sprung from the making of Like Father in 1998. Barry Gough was one of the subjects of Peter Fryer’s Fathers. Emma Dowson was a participant in a video and photography project developed with a group of teenage mothers.

Many of the characters were living the lives they do in the film and the narrative emerged from the peole involved. Many local people (together with the Queen on a fleeting visit to the coalfield) appear as themselves in scenes where fiction and documentary is blurred.

Initial develpopment was funded by Channel Four, but when the broadcaster restructured its film department, Amber felt the need to reclaim some kind of independence and control so they decided to make the feature with considerably less expensive digital video, particularly when the filmmakers were pleased with the quality of the material that had been shot to research the production. Working with a small team, the film was shot with available light and virtually no location budget.

Digital video takes cost pressures off improvisation and experiment and digital editing allowed access to a far wider group of the filmmakers than traditional analogue editing. Amber had already used video in a variety of documentaries and it had benefited from National Lottery funding that enabled a switch to digital editing for Like a Father in 2001.

Further funding from Northern Rock, which was already supporting Amber’s photographic project, Coalfield Stories, not only facilitated the finishing of Shooting Magpies, but also helped the filmmakers plan for the future in a way that hadn’t been possible since the demise of funding from the Channel Four Film Workshop franchise.

The decision to use digital video came out of a desire to get on with things in the absence of a budget. DV allowed Shooting Magpies to be developed on the hoof, using available light. Cost pressures were taken off the experimental process and the production took on a life of its own, fitting around the cast’s daily lives and taking advantage of events happening around them.

Finance difficulties extended the shoot over eighteen months, and there were plenty of events to consider. In many ways it was a return to Amber’s approach in the 70s and early 80s: a small crew, flexible enough to exploit the unpredictable, incorporating it in an evolving narrative that draws its energy from the texture of people’s real lives.

Shooting Magpies has been distributed in a number of ways

1. There was a regional tour, which had three strands:
a) The communities of the people involved in making the film (Easington, Seaham, Thornley, Stanley, etc.)
b) Communities of interest associated with the film (support groups based around drug abuse and carers in that territory, family support groups, prisons/young offenders, etc.)
c) General film audiences (Tyneside Cinema, film societies, Side Cinema, etc)

3. The film was nationally broadcast on More4 (Channel4 digital channel)

4. The film has been released as a DVD, available from Amber at Side Gallery or from our online shop.

There is also a trailer for the film, which can be seen on our website and which Amber put on YouTube.

Digital technology helps in the distribution in that it is easy to produce the work on DVD and that distributed version is of a much higher quality than was formerly possible via VHS. As things move on, it will be possible also to deliver the film as download. Amber are currently planning a web TV operation and may stream/make available as download a lower resolution version of Shooting Magpies along with other work.

Amber has what they call in the business world a 'long tail' operation. We own what we produce and continue to sell it in different versions over many years - we sell work to television and on DVD that was produced in the 1970s, 1980s, 1990s and 2000s. The strategy is to make more of this work available through digitisation (work for which we will also attract grants) thus increasing sales as a long term income strand. Our DVDs are short run, in-house productions, so we don't have to invest in stock and so we can adapt to changing formats. Digital technology has had an impact on distribution, and its impact will increase significantly in the coming years.

There was a £17,000 development grant from Channel 4. We had roughly £40,000 from Northern Film & Media. Amber supported some of the work through taking on a commercial project for Tyne & Wear Museums (audio visual material for Newcastle Discovery exhibitions) and they put some of their first year's revenue money from Northern Rock Foundation into it (say £40,000 of £100,000).

Over a three year period, they raised/spent maybe £100,000 to £120,000 on the film. At the same time, there were the Coalfield Stories photography projects, which, while they all delivered their own exhibitions/videos etc, contributed significantly to the research for the film. Amber raised around £170,000 for Coalfield Stories between 1999 and 2005.

It's also hard to say how much the film has made - again, Amber doesn't really look at it this way. Money is raised to make the work and that helps support making it. Any income then contributes to supporting the organisation long term. Amber is not a commercial organisation - the collective is interested in film as a cultural form.

The Film Council has decided to focus its support on the film industry and has made it clear that it isn't interested in cultural or regional film. Amber strongly disagree with this policy and feel that cultural and regional film is a vital part of the mix.

A recent development has been Side TV, a medium for streaming Amber's short & feature length films, documentaries, dramas, talks & animations, works from the archives & new productions. Amber films & programmes will be screened alongside ones by friends old & new and by the new generation of filmmakers gathering around the Amber operation.
http://www.sidetv.net/