Slumdog as a British Film?! 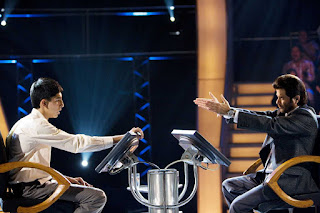 a) A key issue about the British film industry is what defines British cinema
b) Slumdog – set in India; source material was by an Indian writer, although not written in traditional Indian literary style; many of the film’s crew were Indian; all but one of the principle and the majority of the supporting cast were Indian; almost a third of the dialogue is in Hindi.
c) Director, writer, lead actor, key members of the film crew were British; two-thirds of the dialogue was in English; the initial funding for the production was British; the production company and producer were British.
d) It was passed as British by the UK Film Council and thus received tax allowances. However, this has fairly stringent criteria, based on cultural content, cultural contribution, cultural hubs and cultural practitioners and films have to score at least 16 points out of a possible 31 to pass. On cultural content it may get 5 or 6 – the subject matter has some British cultural connection and the dialogue is mainly in English; cultural contribution – it uses British creativity; cultural hubs – although it was filmed abroad there was post-production work in the UK , cultural practitioners – most cast and crew are Indian, but key figures are British. Be lucky if you could award it 12 or 13 points. However, it is believed it passed on the strength of a letter of support written by Christian Coulson, in which he argued the film was a meaningful contribution to British culture.

It could have received tax allowances had it been a co-production with an Indian company as the UK has co-production agreements with certain countries; or if it had qualified as British under European conventions (for which it could’ve received support for screenings, distribution etc.). However, it was a wholly UK-financed production (US money was only involved for distribution) and it was not a co-production with an Indian company.
Influence of British production background as opposed to British/American like Working Title films – no American star.
Posted by HEWORTH MEDIA STUDIES DEPARTMENT 39117 at 21:15