Increased competition in the marketplace from new technology

• Printed newspapers of all kinds have suffered declining circulation for many years now – they are selling less copies.
• People can now get their news in other more convenient ways – mainly on their computer, or their mobile.
• Newspapers used to have a big share of the market in news gathering – with trained reporters and professional camera operators ready to go anywhere to get a story.
• Newspapers also had an excellent network for distributing news – hot off the presses, daily newspapers would arrive at every corner shop and train station first thing in the morning.

News gathering in the 21st century

• New technology, like mobile phones with good quality still and video cameras, means that anyone can take pictures or footage anywhere.
• You don’t need a reporter and camera operator to get pictures of events, or interviews with witnesses.
• If something unexpected happens, ‘ordinary people’ are usually already there to film it. Think of 7/7, for example.
• Sometimes they are called ‘witness journalists,’ ‘grassroots journalists' or ‘accidental journalists.’
• The professional reporter and camera operator are not needed as much any more.

• The London bombings on July 7th 2005 provided an opportunity for citizen journalists to influence the mainstream news agenda.
• No one was closer to events than those caught up in the bombings, and the footage they provided from their mobile phones was shocking and unedited.
• This first-hand view, rather than professionally shot footage from behind police lines, is often more hard-hitting and emotive.
• The audience like to see real events: they are used to reality TV. Now, mobile phone technology means they can see similarly ‘real’ or ‘amateur’ footage on the news.

• The internet and social networking sites means we can all keep in touch without needing the distribution network of the big institutions.
• People can share news pictures and stories on the web, bypassing conventional news institutions. People can set up forums and news groups of their own. They can record their own account of events, and response to events in blogs and on social networking sites.
• The rise of citizen journalists means we are less dependent on the big news providers. 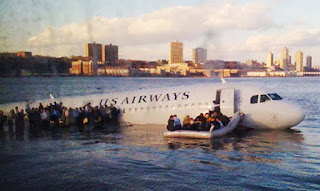 • The Hudson River plane crash on January 15th 2009 story ‘broke’ via twitter.
• Janis Krum was on a ferry on her way to work, when the plane crashed. The first the world knew about it was when she sent out a tweet: ‘There's a plane in the Hudson. I'm on the ferry going to pick up the people. Crazy.’ She also sent out a dramatic picture of the plane half sinking in the river, and passengers crowded on the wing waiting to be rescued.
• While national news organisations quickly swung into action, it was the citizen journalist, empowered by social networking sites that first broke the story - although before we over-romanticise the notion of the citizen-journalist and meember of the public as 'prosumer' (that is, producer and consumer), how often does this happen and did you see news of the Hudson River Rescue in a traditional news outlet?

• Will printed newspapers still exist in 10 or 20 or 50 years time?
• Will websites and personalised updates takeover?
• Will the big news institutions have lost their power?
• Will we all be news producers as well as news consumers?

This was taken from Devon County Council's Teaching the Popular Press Pack - but the mistakes have been corrected...
Posted by HEWORTH MEDIA STUDIES DEPARTMENT 39117 at 20:04