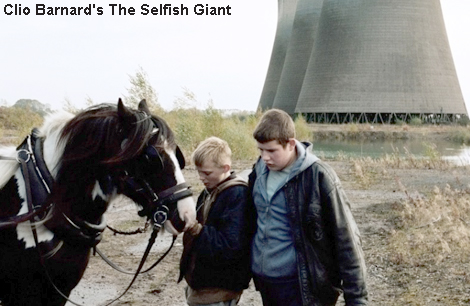 Set in a relatively benign junkland, Clio Barnard’s The Selfish Giant is about two kids who salvage parts for a living, probably at this point, who have nothing better to do with their lives.

You might say Clio Barnard’s The Selfish Giant (2013) is one-third Of Mice and Men (two friends, one of them not ostensibly smart), one-third Oliver Twist (boys seduced into stealing for a modern-day Fagin) and maybe less than a third Oscar Wilde’s fairy tale.

Fact is, the eponymous giant’s status in this picture is rather ambiguous: the title might refer to unscrupulous junkyard dealer Kitten (Sean Gilder - terrific actor, if not exactly of impressive stature); to the tall steel-and-concrete structures looming in the film’s background; to any adult seeing these kids and failing to act decisively (pretty much all of them, when you think about it).

Barnard borrows from the films of Ken Loach and Mike Leigh (Loach’s Kes being an especially vivid precursor), borrows from the kind of kitchen-sink realism Great Britain specialized in back to the ’60s; one also suspects the presence of the Dardenne brothers in the gene pool - the focus on the poor and marginalized, the mostly handheld camera, the total lack of music (other than what you hear from a passing radio, or what onscreen characters sing or whistle aloud), the naturalistic acting, the often bleak urban landscape, the even bleaker weather.

Barnard does make the style her own, however: once in a while she inserts what one might call “pillow shots,” images that bridge the transition from scene to scene - ong shots of transmission pylons, transformer stations, nuclear reactor cooling towers, all often shrouded in haze like immense figures striding straight out of myth and legend. In Barnard’s case her repeated use of these larger-than-life constructs (the majority of which for some reason - they’re the biggest and easiest to find? - involve the power-generating industry) suggests that the story takes place in some fabled fallen kingdom, the ruins a reminder of the glory that was postwar industrial England.

Enter Arbor (Connor Chapman) and his best friend Swifty (Shaun Thomas); the two had just been kicked out of school for fighting. Good for them; they’d much rather work for Kitten, salvaging junk metal and cable copper from wherever and whenever.

Barnard again makes a point, following these children as they drive a horsecart through the streets of Bradford, West Yorkshire: in this depressed economy the enterprise of choice isn’t innovation or manufacture, but salvage - clambering in and out of junk piles, ripping motors out of fridges and washing machines for the coils of precious copper, on occasion stealing the wire out from under an unwary neighbour’s nose.

A police officer spells it out for Arbor’s mother: stealing cable (and not in the digital download sense) is a criminal offense that could land them in jail. But Arbor doesn’t care; school’s a waste of time, bills need to be paid, and he has nothing better to do with his life.

What follows has the quiet desperation of ants crawling over a dead horse’s near-clean carcass, of little creatures competing fiercely over increasingly slim pickings. The boys have to contend with police, with social workers, with their own occasionally worried parents, with property owners who care about their pilfered property, with other adults on a similar mission who wouldn’t mind shoving aside a smaller competitor if it meant snatching a hunk of metal worth ten quid at Kitten’s.

Kitten is equally unscrupulous; when Arbor had been paid a particularly generous bounty, Kitten pulls out a few bills from Arbor’s hand and calls it “tax, collected direct.” Arbor still doesn’t care; he has a little pocket money now, and Swifty can help pay for his family’s overdue electric bill.

Along the way Arbor talks yearningly of boosting power cables from the transmission pylons standing like sentinels over the Yorkshire countryside; like Wilde’s titan they also hold up treasure of a value beyond dreaming, plainly visible but just that far out of the boys’ reach.

That said, the town of Bradford is not exactly Hell on earth. Barnard’s film isn’t as harrowing as Luis Bunuel’s Los Olvidados, where the Mexican slums teem with murderous adults, uncaring-to-the-point-of-perverse parents, and out-and-out child sociopaths; nor are the working conditions as bad as in Ralston Jover’s Bakal Boys where kids use cheap plastic snorkels to dive for scrap metal in the sea, of all places (Jover notes that a child goes missing every other week, thanks to underwater currents, or sharks, or who knows what else).

Interestingly, Bunuel and Jover opt for a chillier, more distant emotional tone, knowing that with material as harrowing as what they have you don’t need to pump up the drama for a strong film, that in fact you need to tone it down considerably or else it all becomes too much - the audience is in more danger of breaking out in laughter than breaking down in tears.

Barnard gives us a bleak but relatively benign milieu where the children are taken care of (albeit indifferently) and the adults do stop short of seeing their offspring as literal prey. In this not-quite-best-of-worlds, a purgatory if you like caught between extremes (with perhaps a bias towards the lower), she’s free to do the vulgar thing, reach out for the melodramatic, explicitly touch our hearts.