A New View on Monster Movies 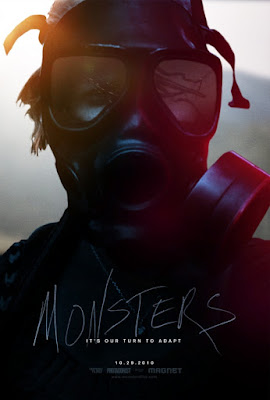 By Drew McWeeny - Magnolia picks up the SXSW midnight movie, and could have a hit on their hands

Gareth Edwards is a very smart guy with a keen eye for composition, and I'm guessing when we look back at 2010 in film, his name will be one of the names that helps define the year.

"Monsters" played SXSW this year as part of the Fantastic Fest at midnight line-up, and with a title like that, it was easy for the festival to fill the theater every time they played the movie. Going into the film, though, I knew nothing about it aside from the title. Someone in line told me that they'd heard it was "the first mumblecore horror film," which sent a chill down my spine and not in a good way. I'm not a fan of mumblecore as a genre or even as a descriptive word. I think it's an excuse for people to make films that are damn close to anti-audience, like a dare. I love small-scale character drama, but there's a fine line between effective and personal and deadly dull whining. Having seen "Monsters," I can see why someone would describe the film that way, but I disagree. I think it sells short of what Edwards has accomplished, and I worry that it would scare off people who would end up really liking the movie.

Right now, there are a number of companies chasing the success of last year's "Paranormal Activity" and "District 9," realizing that the idea of what you can do on film and how much you can make certain films for has changed. Paramount's got a new division that wants to make ten movies for a total of a million dollars. I hope they take a look at "Monsters" and reach out to more people like Gareth Edwards, who has been working for a while in the FX community. Makes sense, because while there are some inventive and ambitious special effects in the film, there's a handmade feel to it all that is a big part of its charm. Edwards pretty much ran this all as a one-man show. He wrote and directed, he shot the film himself, and he did all of his own FX work, on a budget of $7000. This is what independent filmmaking in the 21st century is going to look like. The most impressive thing about that is how you can sit in the theater and never once question how much the film cost. It's a "real" movie. And thankfully, Edwards chose not to make a "found footage" movie, something which I'm personally very tired of, and a cheap solution to a budget issue. His film has a documentary feel to it that comes from how it was shot, but the camera isn't an actual character in the film.

Set several years after a space probe carrying samples of extraterrestrial life broke up during re-entry, scattering samples all across North and Central America, the film concerns a journalist who is asked by his publisher to track down the publisher's daughter and bring her home. The journalist, Andrew Kaulder (Scoot McNairy), is determined to get into the most dangerous part of the infected zone so he can capture some images of the giant monsters in action, so the last thing he wants to do is babysit Samantha Wynden (Whitney Able), especially if that means leaving the place where the monsters are located. Edwards took his actors to Central America and shot his entire movie guerilla, using real people as much as possible, layering in the textures of the world, the details that sell the idea that alien invasion has become a way of life, all in post-production. It's a seamless world he's created, and the film has a lovely, authentic quality to it. Both McNairy and Able are low-key, never pushing the drama too hard, but selling a real sense that they are living these events.

I remember Quentin Tarantino at one of the many festivals he threw in Austin talking about how he wanted to make a movie set in Tokyo that was just a low-key love story that played out while Godzilla rampaged elsewhere in the city, a distant threat that never became front and center, using the giant monster as background during a human story. Well, Quentin, Gareth Edwards beat you to it. Ultimately, his movie is about these two people realizing that they've got a genuine connection and that they would rather spend a life of uncertainty together than continue to protect themselves and be alone. Which is not to say that there are no giant monsters in the film... there are, and they are genuinely freaky and alien. It's just that there's never the feeling that the movie is about the monsters or about the infected zone or even about the invasion of Earth. Edwards is far more interested in what's happening between these two people and what it is that has driven them to this place where they meet than he is in just throwing effects and sensation at you. It's a very controlled film, very intimate. Because so much of it is improvised, not every character thread adds up, but the big picture works.

Magnolia picked the movie up during SXSW, and with some careful nurturing and a smart campaign, this could be a real break-out hit for them. And if nothing else, it's a fascinating look at just how much it's possible to do with limited resources, a miniscule crew, and boundless ambition.