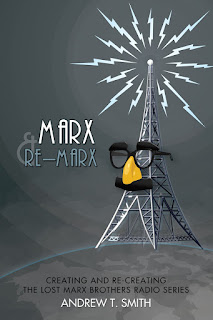 Written by Andrew Smith, one of our former students!

In 1932 the legendary Marx Brothers began work on one of their most hilarious and enduring feature films, Duck Soup. At the same time work also commenced on their first ever radio series, a half hour sitcom that featured the adventures and mishaps that befell the underhanded lawyer Waldorf T. Flywheel (Groucho) and his hapless assistant Emmanelle Ravelli (Chico). This series, eventually entitled Flywheel, Shyster and Flywheel, written by Marx collaborators and comic geniuses Nat Perrin and Arthur Sheekman, was popular with audiences but short lived and soon forgotten. The scripts were shelved, the recordings discarded and the Marxes went back to work on Duck Soup, A Day at the Races and other comedy classics.

Flywheel, Shyster and Flywheel, however, refused to remain buried and tantalizing glimpses of routines from the series went on to be reused in classic films like Duck Soup, A Night at the Opera and The Big Store.

Luckily for Marx fans everywhere the scripts to these classic radio broadcasts were rediscovered in the early 1980s, their publication eventually leading to a affectionate and side splittingly funny British remake of the series for BBC Radio 4.

You can't keep a good joke down.

For the first time in detail Marx and Re-Marx takes a look at the history of this enduring series, its genesis, its death and its resurrection.

Previously unpublished letters from the desk of Flywheel creator Nat Perrin.
Full Episode Guides for both incarnations of the Flywheel and a guide to related productions.
Contributions from the cast and crew of the BBC remake of Flywheel; Mark Brisenden (Weekending, Spitting Image), David Firman (Dinner Ladies, Norbert Smith: A Life), Graham Hoadly (The Adventures of Sexton Blake, Chitty Chitty Bang Bang: The Stageshow), Dirk Maggs (Superman: Doomsday and Beyond, Dirk Gently's Holistic Detective Agency), and Frank Lazarus (Pennies From Heaven, Our Friends in the North).
Transcripts of the remaining recordings of the original series.